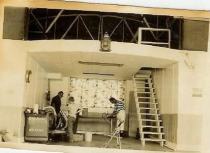 A new highway to Harveys Lake brought many new summer residents. There was no public access to the lake waters. Jack Zorrzi, a Chris Craft dealer, had a marine railway with a motor winch to haul boats at his cottage (now pole #37). There were keel sailboats, Jolly boats and large inboard motor boats, Chris Craft, Garwoods and Great Lakes. Ice Boats were popular.

One group of dock owners began meeting, taking turns hosting, as their guests brought a "covered dish". The common interest of this group was motor boat racing. While they held local races, they wanted to conduct races sanctioned by the American Power Boat Association. They found it necessary to be incorporated to reduce liability. Late in the year, the club was organized, electing Reese Meridith as Acting Commodore.­

While the club continued to meet and hold elections, all racing and social events were cancelled due to WW2. Most of the minutes of the meetings for these years have been lost.­

The Club now held motor boat races sanctioned by the American Power Boat Association. These races drew large numbers of spectators around the lake. Some of the awarded trophies remain in our trophy case.­

Motor boat racing was ending. The last sanctioned race was in 1959. There was just too much traffic on the waters to be controlled for the races. The Smith airplanes were having the same problems with take-offs and landings.The Club members no longer needed to be property owners on the lake. Members were,however, required to be a sailboat owner. Membership was increasing. The dock was crowded. The Club leased 200 feet of lake front from Robert Stull. This property had a rock pier a short distance north of the airplane hanger.Sail boat races were becoming popular. The boats were a mixture of keel boats and various dinghies. The boats were towed to the middle of the lake for the start. The first-class boat races were the Comets. This fleet was chartered in 1959. The Lightning and Mobjack fleets were chartered in 1960. These fleets drew attention as they "flew' their colorful balloon sails (spinnakers).Jack Curtis was the first race chairman. He was well-known for his strict adherence to the racing rules. Competition was fierce, protest common, many of which were loud and close to becoming physical.­

Russell Smith gave the Club an option to purchase the property with the airplane hanger. Many of the members thought the price too high. Another property was considered, 130 feet of lake front property, now Pine Grove Camp.­

In September, Smith terminated the option stating that the Club had until November 12th to purchase or he intended to "place the property on the market for $25,000". Commodore Jack Barnes called an "emergency meeting". A move, spearheaded by Barnes and Woolbert, ended a very spirited meeting with a majority vote to purchase the property. In later years, Jack claimed he got everyone drunk before calling for the vote.­

Many members purchased a $100.00, 40-year, non-interest debenture bond with a recall date of January 17, 2002. In February papers were signed. 1st National Bank of Luzerne holding a mortgage of $19,000. While most of these bonds have been retired, many as a donation to the Club, there are still some outstanding. The exact number is not known.In the following years, the airplane hanger doors were removed and then an addition to the front of the hanger was built. The roof of this addition was supported by laminated trusses, without center supports. Radical design at that time, by Jack Barnes. Most of the work was done by the members, including building of the outhouses across the road.The rear of the hanger still stands, used now as kitchen, meeting room, storage loft and changing rooms. The restrooms were installed in 1964. The outhouses still stand, used only by brave souls visiting the Club in winter.­

Another very spirited meeting with a 13-vote majority. The motion carried to amend the by-laws, changing the name to: Harveys Lake Yacht Club.­

The by-laws were again amended, now only the board members were required to be sailboat owners. Membership continued to grow. The Club sponsored many activities; fashion shows, teenage dances, shipwreck dances, Gay Nineties Saloon and many other parties. Membership was capped at 100 families.­

The once popular "Cups and Flags' banquet, awarding the trophies for the sailing season, was discontinued as was the colorful Red Sails Labor Day parade.­

A severe winter storm. Snow and ice accumulated on the roof 6-8 feet high. This tremendous weight caused the laminated trusses, after 30 years, to bend and fail.­

The front section of the Club was remodeled to its present design.

Red Sails in the Sunset Labor Day parade was able to start up again as the Harveys Lake Borough enacted an ordinance of "Slow No Wake After Sunset" for power boats on the lake. Once again the parade is a popular community affair with fireworks and many docks decorated.­

The Club lost the last of the charter members, William "Bill" Woolbert. Bill was an active an honored member for over 60 years.­ The tradition of "Covered Dish" dinner meetings continue, attended by 80-100 members during the summer months.

The Christmas dance of the 50's developed into the Commodore's Ball and became one of the top social events of the entire community; a black-tie affair with Bobby Baird's and Lee Vincent's bands a tradition.

The ceremony "Passing of the Hat" continues at the Commodore's Ball. The ceremony honors the past Commodores in attendance as they pass the Commodore's cockade from one to another up to the Commodore for the coming year, signifying the start of his term. Earl Phillips and Frank Wadas were perennial toastmasters.

The club's history was written by the late Frank Wadas, the club's historian. On Father's Day, June 19th, 2011, the Club's Committee Boat was named in honor of Frank Wadas in a quiet ceremony. A plaque has been placed on the boat with the name "Frankie Baby" to always remember a great man.